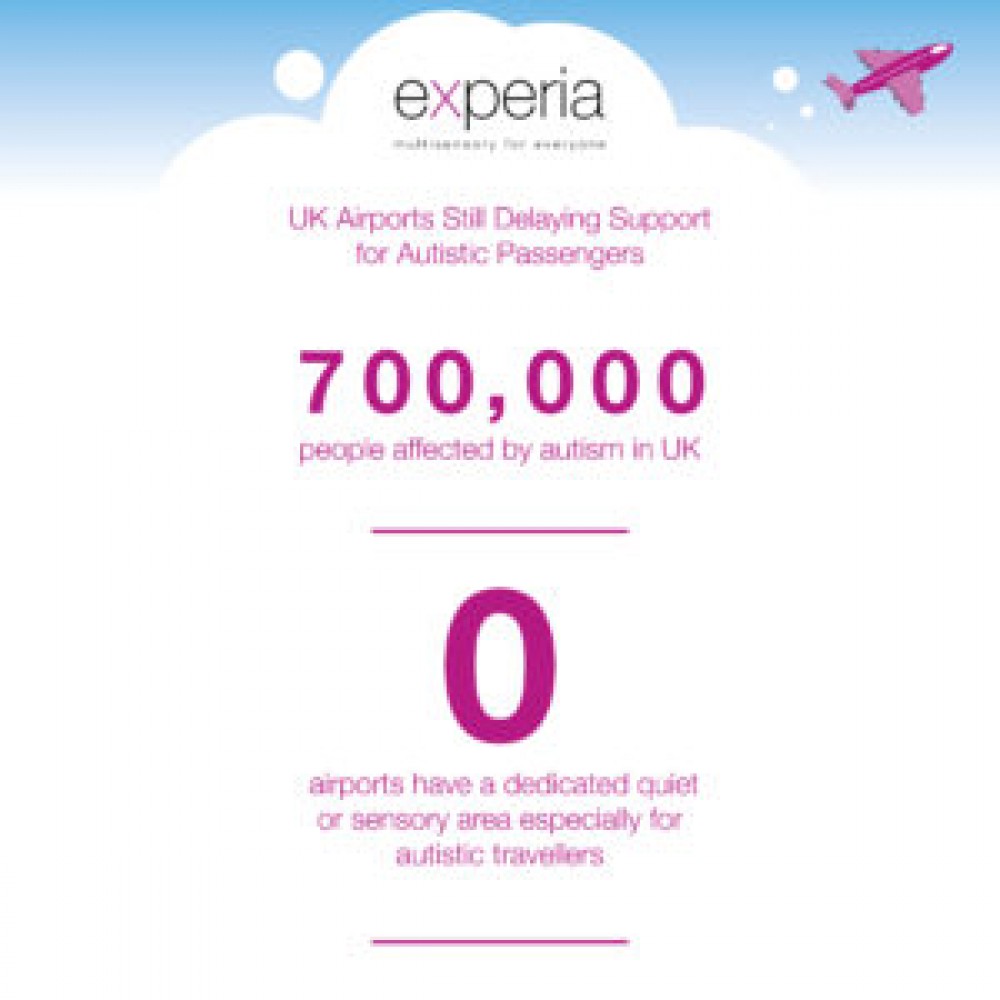 Many autistic travellers find air travel a difficult experience due to the airport environment. Large crowds, noise, invasive security checks and disruption to familiar routine, can all make travelling abroad difficult for many individuals with ASD and their families. Despite clear guidelines published by the Civil Aviation Authority in December 2016 on how UK airports should support people with hidden disabilities, new research recently conducted by Experia has uncovered that little has improved for those travellers with these disabilities, in particular autism.

CAA guidelines for airports state that ahead of travel, airports should provide clear and detailed information for people with hidden disabilities to help with overall familiarisation of the airport environment and ease anxiety and stress. Experia’s 2017 research demonstrates that pre-flight information is not always easily available for autistic passengers - 30% of airports do not provide a dedicated section on their website to communicate much needed information to help autistic passengers navigate their journey.

13 out of the 30 airports contacted provided evidence of having worked with autism charities to improve the knowledge of their staff (with Cardiff being recognised as ‘Autism Champions’), however only four of the airports contacted: London Heathrow, London Southend, Exeter and Norwich, said they had trained staff on hand to help passengers with hidden disabilities.

“The number of flights made by disabled people has increased by more than two thirds since 2010."

“The Accessible Airports report we published month showed that, overall, disabled passengers are satisfied with the service they receive at most UK airports but, despite continued innovation from airlines and airports, there is always more that can be done."

“Our guidelines on how to make air travel more accessible to people with hidden disabilities, which we launched last year, not only clarify airports’ legal obligations but also offer advice on how improved communication can help reduce stress and anxiety amongst travellers."

“We will be reporting on how well airports have implemented our hidden disability guidelines in due course.”

“It is encouraging to see the overwhelming majority of UK airports providing a good service for passengers with a disability, but I am determined to push the aviation industry to do more. As part of our Aviation Strategy, we will consult on ways to make aviation more accessible for people with both visible and hidden disabilities, such as dementia, autism, loss of sight or hearing, as well as age-related conditions.”

Yorkshire-based Experia is one of the UK’s leading designers, manufacturers and installers of sensory equipment creating products to aid sensory development. The company regularly works with schools, hospitals and specialist care centres across the country to create multisensory environments.